In 1827, Dumfries is described by Robert Chambers in The Picture of Scotland as ‘the capital of the South-Western province of Scotland … well and regularly built, with an aspect of great cleanliness’. It has, he says, ‘the double advantage of being the residence of the smaller … gentry of the province, and of being a great market town.’ (see Robin Smith, The Making of Scotland: A Comprehensive Guide to the Growth of Scotland’s Cities, Town and Villages [Canongate, 2001]). It was a major postal centre, accessible from the sea by small craft, had a small but thriving hosiery industry from the late 19th century but may have been more characterised as an agricultural and market centre. In the 1911 census, it had a population of 16,011.

At the end of the nineteenth century, it had two historic claims to fame in public and civic entertainment: the Rood Fair, held in September, could trace its history back to Medieval times and was still one of the major Fairs in Scotland, attracting Travellers and Travelling Shows as part on their annual itinerary; and, the Theatre Royal on Shakespeare Street was the oldest functioning theatre in Scotland. It was opened in 1792, and was patronised and supported by Robert Burns who lived in Dumfries from 1791 till his death in 1796. Both venues were prestigious. The Autumn fair offered such major attractions as Barnum & Bailey’s Circus, Manders’ Freak Museum, and W. F. Cody’s ‘Buffalo Bill’s Wild West’ show. The Theatre Royal attracted major national companies like Benson’s Famous Shakespearean Company, and personal appearances by J.M. Barrie and George Bernard Shaw.

The cinematograph broke into this duopoly in predictable and unpredictable ways. The first fixed-site venue to announce the cinematograph was the Theatre Royal, which advertised ‘the Wonderful Cinematograph, the Novel Sensation of the Season’ on 23 January 1897, accompanying A.E. Percival’s theatre company. It was followed in March 1897 in the Mechanics Hall in Nith Place, which advertised a programme by William Walker & Co.: 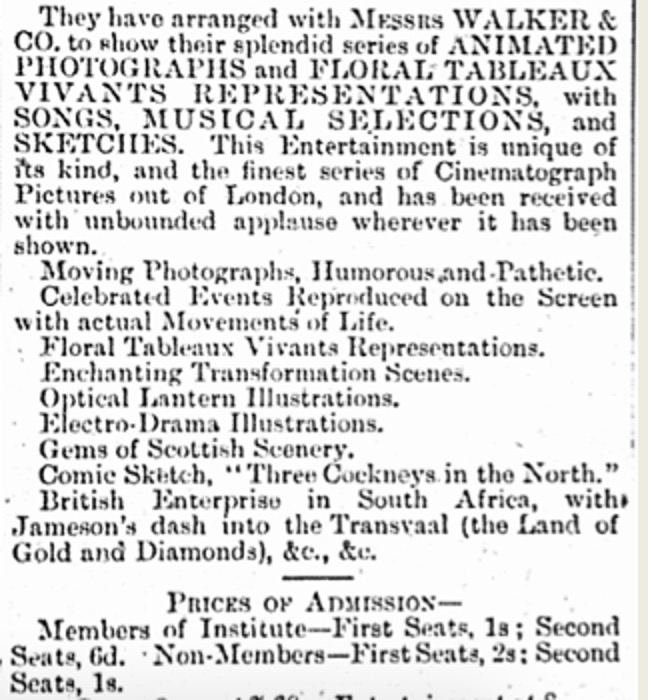 The Mechanics Institute was opened by the Masonic Lodge in 1825 with a library of 8,000 books and with classes for young lads whose education had been neglected. To it was added in 1858 the Mechanics Hall, an ‘elegant and commodious hall’ with seating capacity for 1,000 people. These two buildings, The Mechanics Hall and the Theatre Royal, were the principal fixed-site locations for he cinematograph throughout the 1910s, apart from occasional exhibitions in church halls and schools of ‘improving’ animated pictures.

Importantly and predictably, the cinematograph also appeared in tents and booths at the Rood Fair, and by September 1897, George Green, one of the leading travelling fairground showmen, whose company would build Green’s Playhouse in Glasgow in 1927, was advertising the Cinematograph or Animated Photos along with Green’s Grand Roley-Poley Invention (‘with all the movement of a ship at sea’) and Green’s Grand Switchback Galloping Horses (‘one of the finest and easiest Machines ever’). By 1899, Green, who went on in the 1910s to establish Green’s Film Service and Green’s Scottish Moving Picture News to provide newsreels and topicals for local managers, was already advertising ‘a Number of LOCAL PICTURES taken expressly for the ROOD FAIR’: an early appearance of the ‘local topical’. (Dumfries and Galloway Courier, 23 September, 1899). In 1902, the Biddall Family was also offering local topicals 'showing daily life in Dumfries': ‘Children Leaving St Andrews School’, ‘Employees Leaving Maxwelltown Tweed Mills and at dinner hour'. (Dumfries and Galloway Courier, 27 September, 1902)

What seems distinctive about early cinema in Dumfries in the first decade of the twentieth century, compared with other similarly sized small town, was its low profile and the apparent unwillingness of some of the major touring companies and concert parties to establish it on their touring schedule. The Theatre Royal and the Mechanics Hall were indeed visited by a number of the familiar companies in the late 1890s and the early 19010 : Calder’s Famous Cinematograph and Popular Concert, the clairvoyant Dr Ormonde and his Sunflower Company, the Coutts Family and their Scottish Troubadours were all accompanied by the Bioscope, Edison Pictures, Animated Photos or some version of the cinematograph. What is somewhat surprising is that some of the most ubiquitous of these touring companies appeared once or perhaps twice in Dumfries and did not come back. George Calder who appears at least annually in places like Lerwick, Campbeltown, Oban, Hawick, Bo’ness and Montrose throughout the 1900s, appears in Dumfries twice in 1901, and never returns. The Ormondes appear in 1897 and 1901, and then do not re-appear. Walker & Co., a seasoned touring company (later to become Walker’s Royal Cinematograph Company after introducing the cinematograph to Queen Victoria at Balmoral), having introduced the cinema to Dumfries in 1897, never returns. What is even more remarkable is that whole years go by without any cinematograph shows being advertised in the Dumfries and Galloway Courier. In 1903 and 1909, no cinematograph shows are advertised; in 1904 and 1906 only one show is advertised; and in 1902 there are only two advertised shows. Now it is possible, of course, that some shows were advertised by handbills, avoiding the expense of press advertising, but this is atypical, particularly when there are a large number of advertisements for live entertainments, including shows by Harry Lauder and W.E. Frame and by touring theatre companies at the Theatre Royal. At the very least it suggests that in the 1900s cinema did not have the public profile and civic significance that it had in many other small towns, many of them much smaller than Dumfries. It is difficult to avoid the impression that, for whatever reason, Dumfries was seen by the established travelling cinematograph companies as an unattractive market, and that, civically, the early novelty of the cinematograph had a relatively low profile, at least in terms of press advertising and press reporting. In this respect it is not entirely dissimilar to Hawick and suggests again the quite distinctive ways in which small towns and local communities engaged with cinema. Socially, the engagement of the local press and civic culture in the cinematograph in Dumfries gives the impression is of a relatively prosperous agricultural and rural population, perhaps with a cultural predisposition towards a well-established and prestigious theatre which had been particularly well served by visiting companies.

It is something of a surprise, then, when, in September 1910, the Theatre Royal, the oldest theatre in Scotland, suddenly announces itself as ‘The Electric Theatre (late Theatre Royal)’, and begins to be a typical post-1910 venue with a combined programme of animated pictures and live variety acts. The Electric Theatre is refurbished in 1912 to give a sloping floor with an even better view of the screen, and, with the Mechanics Hall seems to have responded to a presumed demand for the cinematograph for which, in Dumfries, there was little prior evidence.


The building starts its existence as a picture house, but we understand that it will also be available for dramatic and for variety entertainments. If there be anything in the complaint so frequently made that Dumfries is singularly deficient in places of amusement, the new Theatre should be welcomed by the public as a very desirable acquisition, and command liberal support. (Dumfries and Galloway Courier, 25 November, 1912)


The building had a seating capacity of 1250, with 919 in the Auditorium, 168 in the Circle, and 163 in the Promenade, and four dressing rooms for artists (and no wash-hand basins). By 1913, the Theatre and Picture House was renamed as the Lyceum and continued as a cinema till the 1960s.

The Electric Theatre and the Lyceum continued throughout the war years, with the familiar pattern of cinema and supporting live acts, and the familiar activities in support of the war — free screenings for military personnel, patriotic addresses (one lady told her restive audience that ‘if they were men they would not be sitting in a music hall enjoying themselves’ [Dumfries and Galloway Standard, 11 May, 1914]), and collections to send cigarettes to the soldiers in the trenches. Both cinemas showed The Battle of the Somme in the same week in 1916. Both theatres responded to the boost provided by Chaplin films and to the rise of serials to keep audiences coming back. Both occasionally suspended cinema screenings to host theatrical touring companies, and, interestingly, it seems that the Lyceum is more open to visiting theatre companies than the Electric Theatre, despite its history.

The Mechanics Hall seems to have suspended cinema screening in the early years of the decade, perhaps in the face of competition from the Electric Theatre and the Lyceum, but on Christmas Day, 1916 it reopened with a screening of The Rosary, under the management of Hugh Bartlett, Edinburgh, as lessee and manager, and with the gallery re-seated with ‘luxurious tip-up chairs, and other improvements … to ensure the comfort of our patrons.’ (Dumfries and Galloway Standard, 16 December, 1916).

In 1920, yet another cinema was opened in Maxweltown, The Picture House, in what may have been the David Hall on David Street. This was operated by the same company as the Lyceum and seems to have been an attempt to open a pictures-only theatre, allowing the Lyceum to host variety acts and touring theatre companies more frequently. The experiment was, however, short-lived. In May 1922, the Dumfries and Galloway Courier carries an announcement that the Maxweltown Picture House would close for the summer, and it closed never to re-open.

It may have closed because the competition was now too great. In December 1921, the Mechanics Hall ceased to be the Mechanics Hall and became The Playhouse, opened by Sir James Crichton-Browne at an opening attended by the Provost and Magistrates, with a showing of Little Dorritt. This is a familiar pattern in early cinema history signifying that a cinema was not simply a place of entertainment but was also evidence that a cinema was a civic asset and was evidence that a town was ‘up-to-date’. An editorial comment in the Courier (21.12.1921) notes that it is the ambition of the directors that the new Playhouse will revive and improve ‘the excellent old traditions’ and radiate ‘throughout the community something of the same sound and wholesome influences that the “Mechanics” undoubtedly did in days gone by’. To all intents and purposes, the Playhouse became a cinema, and, for the most part, it seems to have become a major cinema showing a pictures-only programme without the interruption of live acts or ‘turns’.

These are the cinemas that remain throughout the 1920s. The Lyceum offers mainly a picture programme, but with occasional variety acts, occasional weeks given over to visiting theatre companies, and occasional weeks given over to local groups such as the amateur Guild of Players. The Playhouse becomes a cinema with a picture-only programme. And the Electric Theatre, the former Theatre Royal, remains what had become a little old-fashioned — a mixed venue with the less spectacular pictures accompanied by touring live variety acts.: Dick Turpin’s Ride to York alongside Madame Dalmere’s Table Circus with ‘Wonderful Performing Monkeys, Rat, Dogs, Rabbits, Pigeons, etc.’

Dumfries shares with Hawick a hesitant take-up of ‘the Wonderful Cinematograph, the Novel Sensation of the Season’, and is marked by the reluctance of some of the major touring companies to return. The main exposure to the cinematograph seems to be through the fairground shows associated with the Rood Fair. In this it is quite distinct from other small towns in the sample (Lerwick, Campbelltown, Oban, Bo’ness, Montrose). By 1921, however, cinema has become part of the civic culture, with three venues continuing to serve a population of just over 16,000 throughout the ‘silent period’ and well into the period after the introduction of sound. 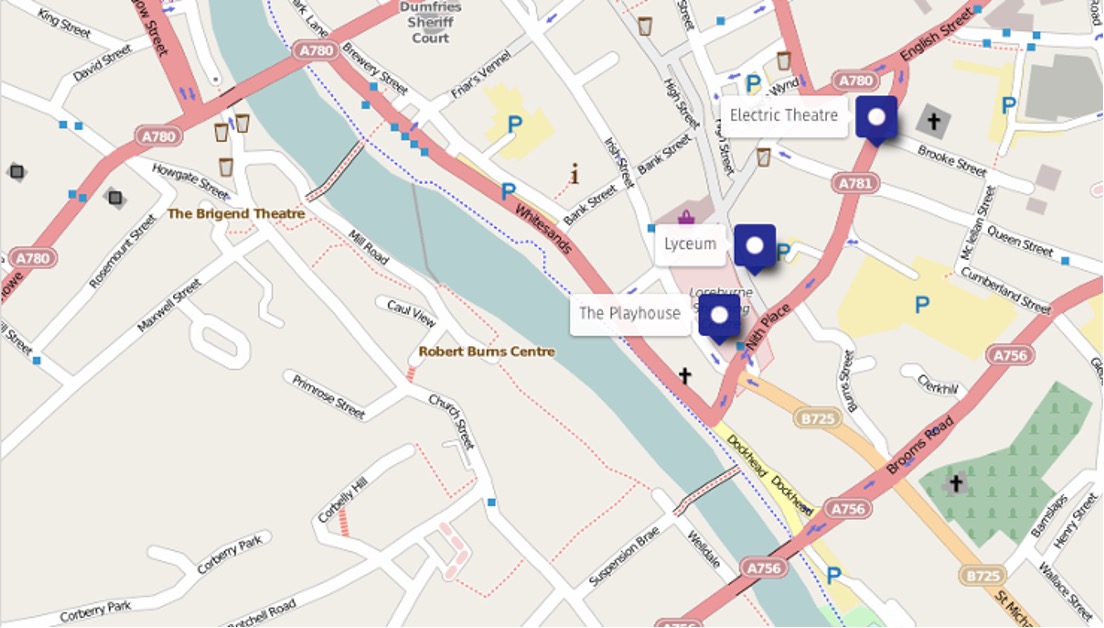