'These remarkable films will be the product of the highest art; and the Company which has been engaged to produce them will neither be short in numbers not short of ability. Indeed, the greatest exponent of these plays has, at enormous expense been secured, viz.: JOHN CLYDE the famous ROB ROY, with all the best Actors in the various principal parts, and a Company numbering fully eighty in all.
'The United Films Ltd. are taking these remarkable films on the actual World Renowned historic ground at the CLACHAN OF ABERFOYLE, PERTHSHIRE, SCOTLAND.
'Too much cannot be said about the natural grandeur of the old Clachan and surrounding scenery, which will go to produce two pictures of ROYAL SCOTTISH DRAMA, the like of which have never yet been thought of, and will thrill the heart of every Scotsman all over the world. This great and stupendous work has fallen to be accomplished by the young and enterprising Scottish Company, THE UNITED FILMS, LTD.
'Special Scripts of these thrilling Scottish Dramas have been written and already the plays have for weeks been under rehearsal by the huge Company which will be assembled early in July at ABERFOYLE.
'Although the matter has only been whsipered abroad, already the enthusiasm in the Picture World has been enormous. We are daily meeting with anxious inquiries in regard to the progress of the production.
' You want further particulars of this business promptly if you are to be in the fore front, therefore application should be made to The United Films, Ltd., 4 Howard Street, Glasgow, Scotland. Managing Director: JAMES BOWIE. 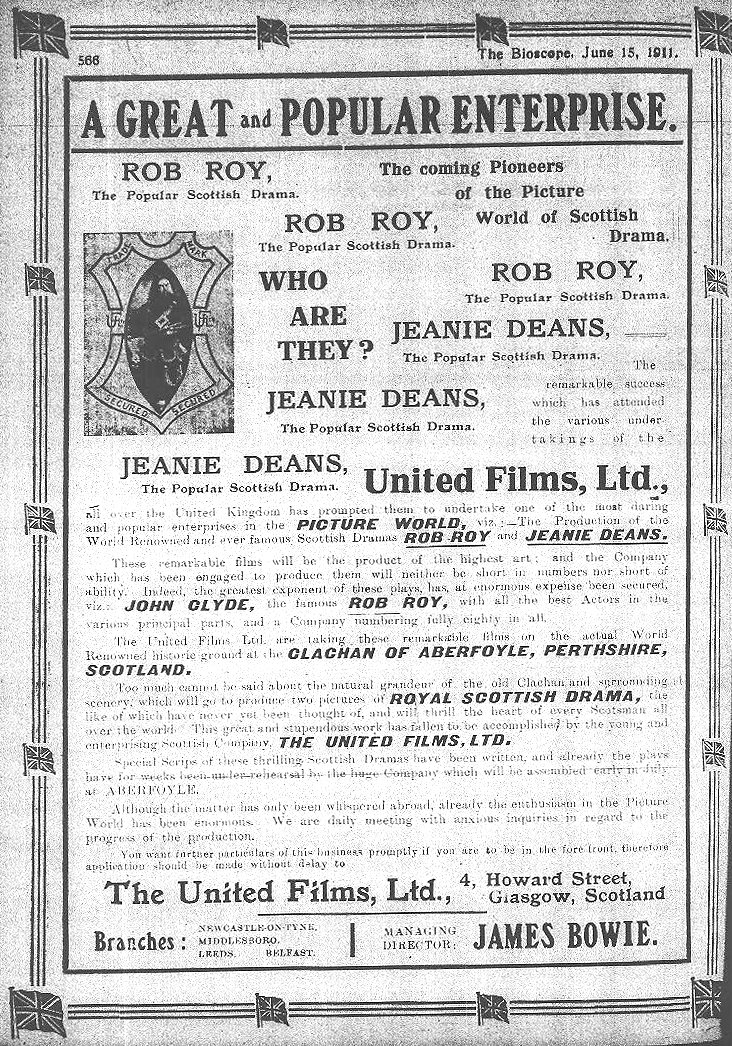